We will use the United States as the example as it is the largest economy in the world and its information is easy to get. But, these principles could easily be applied to another country or to the world as a whole. Don't worry, no heavy mathematics here. LOL...

Velocity of Money, Money Supply and the Gross Domestic Product

According to the Federal Reserve Bank of St. Louis: "Velocity of Money can be thought of as the rate of turnover in the money supply--that is, the number of times one dollar is used to purchase final goods and services included in GDP."

Short and simple concept: The Velocity of Money is how fast the money is being spent.

According to Investopedia.com: Gross Domestic Product - is the monetary value of all the finished goods and services produced within a country's borders in a specific time period, though GDP is usually calculated on an annual basis. It includes all of private and public consumption, government outlays, investments and exports less imports that occur within a defined territory.

Short and simple concept: Gross Gomestic Product (GDP) is the total value of all finished goods and services produced.

According to the BusinessDictionary.com: M2 Money Supply is currency in circulation (notes and coins), banks' reserves with the central bank, checking accounts plus deposit accounts transferable by checks, and savings accounts and non-interest bearing bank deposits. 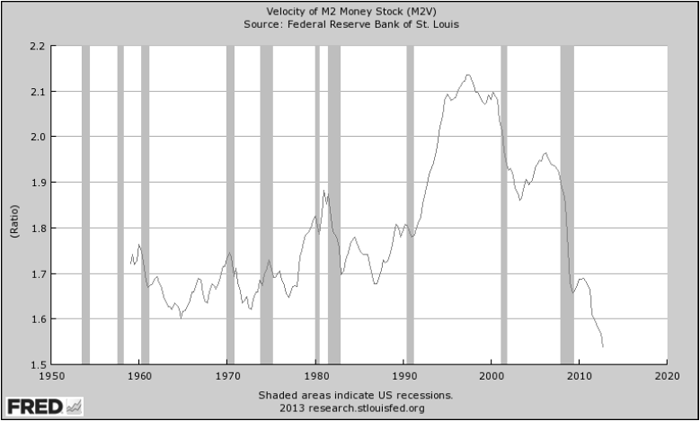 Short and simple concept: The M2 Money Supply is the quantity of money that is readily available to spend.

If you are a silver investor, it would be wise to keep your eye on the global economy. You can do so by regularly checking the Velocity of Money, GDP, and M2 Money Supply. For your convenience, here are the St. Louis Fed's version of the charts:

Let's look at one of these charts right now. As you can see at the top right of this page, the velocity of money has been DECREASING since the mid-1990's. The velocity of money is lower now than any time in the last 50 years. Looking at the graph above you can that we have incredible DEFLATIONARY pressures on silver and markets in general.

According to Gary Shilling, who wrote, "The Age of Deleveraging, Investment Strategies for a Decade of Slow Growth and Deflation" there are many deflationary pressures in the world today. One very big deflationary pressure is the major deleveraging that is going on. By deleveraging, I mean paying back debt by the public sector and less willingness to loan by the financial sector - among other things. If people are using their money to pay off debt they have less money to buy things. Sounds like a state of low velocity of money to me. Dr. Shilling's prediction is that this global condition of deleveraging will continue on until at least 2018.

Don't blindly buy into all the "INFLATION" cries being shouted all across the Web. There are many other factors influencing silver investing. Not all of them inflationary. If Gary Shilling is right we will have reasonably low silver prices for years to come. That would be totally OK by me. It gives me more time to accumulate.